The Joy of Letting Go

My Journey Through the KonMari Process 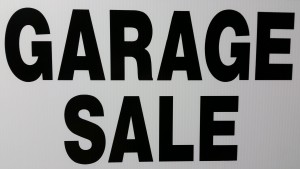 Whether it’s losing weight, tackling your inbox, or KonMari-ing your home, we are all motivated by making progress.  Numbers on the scale get smaller, the list of emails grows shorter, clutter is reduced – and we feel compelled to keep on.  I believe this is why Kondo is so adamant that you take on your tidying festival in one fell swoop.  She knows that when you don’t see progress it is easy to just throw in the towel and assume this is just how it’s going to be.  I thought I was making progress, cruising right along through this KonMari Method – until I wasn’t.  We had a couple of missteps (see my post The Weight to refresh your memory) that pretty much ground progress to a halt – until now.

Sending the Clutter on its Way

Even though I had taken some items to be donated earlier on in the process (remember all the boxes of kitchen stuff?), there were many items that we came across that we decided to save for a garage sale. After being plagued by one rainy weekend after another, we finally got a break – sort of. Expecting a rainy Friday but a sunny Saturday, we decided to take a chance – and held it on a Thursday.  Best decision ever.  Who knew that Thursday is actually the prime garage sale day?  We barely had the stuff out of the tubs and bags before customers started showing up.  And you can imagine how long it takes to lay out several HUNDRED t-shirts?  But it was worth it.  With one customer after another I was sending the clutter on its way, letting go of items without remorse or regret, and feeling positively giddy – joyful. Yes, the money is definitely nice, but the almost physical feeling of being unfettered as each piece left the garage is even better. I’ll let the pictures speak for themselves…(click an image to enlarge)

We still have a few tubs of books to go to Half Price Books and lots of EMPTY tubs to use as needed.  We even sold some at the garage sale! But I now feel like I can tackle the rest of the items in the house with a clearer focus – and they will be the hardest. Collectibles, sentimental items, and photos – in sixty albums.  Mull on that for a minute.

So, I can’t leave this post without telling you about the crib.  When we moved from our rental house (22 years ago), we moved our little girl into a toddler bed and out of her crib.  We took the crib apart and stored it in the house. At first it was tucked under a bed, but the longer we stayed here and accumulated more stuff, we sent it over to the storage unit we had to rent.  And there it stayed until we emptied that unit a couple of months ago. There was a baggie of springs and bolts that my husband diligently kept up with so we could use the crib again for a grandchild some day.  But in the spirit of tidying up and letting go, we decided that the crib could go too. We couldn’t sell it on day one of the garage sale because we couldn’t locate the baggie of bolts, but on day two – success!  But not really. As he gathered up the pieces to set out he realized something – we did not have the metal rods that the moving side of the crib slid up and down.  They weren’t left in the storage unit, we were certain of that, because the more we thought about it, we couldn’t remember EVER having seen them. It is entirely possible this crib which we moved from our old house, to our new house, to the storage unit, and back to the house had been missing pieces for twenty-two years. My husband made sure we had the springs and bolts; sadly, we had nothing to attach them to. Sometimes, you just have to laugh.

From Clutter To Joy

Simply a blog to inspire a joyful life.

a blog without a niche

Stuck in a routine and trying to get out of it!

My Journey Through the KonMari Process

The Art and Craft of Blogging

The latest news on WordPress.com and the WordPress community.